Sometimes I want to post a long rant about why we should stand for the democracy of the country. But then I realized that my “woke” friends are already standing up, and based on debates I had with some Duterte supporters – they actually wanted this. To them, democracy is trash and we need to be more like North Korea. Because despite of the image that NK has internationally, they find dictatorship to be the Philippines’ only hope in order to “discipline” its people.

It’s sad because while it’s only today that we have lost our trust in the system, they have lost their trust in it a long time ago. To them, it’s only fitting that Sereno got ousted. Because as the chief justice, they felt that she – or the judiciary system as a whole – has done nothing to save them from the injustices that happens to them on a day to day basis.

I remember asking a guy in Dagohoy about why the streetlights are out. After telling me that the cables were stolen by guys from Old Balara, he proceeded to tell me that it’s actually better now. He told me that before the “tokhang” days, those Old Balara guys are unstoppable in their daily petty crimes. Worse, they in Dagohoy are taking the blame since the muggers of Old Balara run to Dagohoy to lose their victim. If you are part of this sector in our population, there’s nothing else you could see Duterte other than the hero who saved them from the bad guys. And from there, everything else that he does becomes heroic, and there’s nothing you could do to change their mind.

Unfortunately, while few of us are privileged enough to go to some good university and learn about what’s right and wrong, these guys – which comprises majority of the population – didn’t. They don’t care about the constitution, or democracy, or whatever intimidating words you have in your vocabulary. All they want is to get through the day and in their point of view, Duterte is the guy that makes that happen for them. If freedom means they get mugged again, then screw your bourgeois ass.

It’s not that I agree with them or what’s happening now. But this is what populism is. This is what the majority wants. I just hope we don’t come to regret this in the next few years.

I see Thanos as some sort of natural phenomenon. I think it’s a narrative on us humans. We are relentless in our pursuit of knowledge and advancement, dominating our way in the tree of evolution, to the point that we destroyed balance in nature itself. Thanos is like the inevitable thing that needs to happen in order to restore balance in nature. And we humans are like the Avengers, trying to stop that from happening because we are so convinced that what we are doing and what we believe is right. We believe we can stand even against the force of nature itself. But in the end, it’s our human nature – our flaws, emotions, and impulses – that eventually brought us to our demise.

Thanos is the antagonist in the latest Avengers movie. Unlike Thanos in the comics who’s motivated by his infatuation with death, the Thanos of the Marvel Cinematic Universe has a more mathematical and socio-economic motivation in his goal of obtaining the infinity stones.

This version of Thanos had experienced first-hand what happens if population isn’t controlled. He was called a mad(titan)man by his fellow citizens in Titan for suggesting to kill half of their population at random because he had foreseen what’s about to happen. Without the will then to act on his belief, he saw with his two eyes how an advanced civilization fall to its knees. He saw death and suffering. He saw how people killed each other for limited resources then eventually die of starvation.

That picture in mind motivated him in his quest to kill half of the universe’s population. He didn’t want what happened in Titan to happen in other civilizations as well. He believes that the universe needs to save itself from itself. Its resources are limited, but its inhabitants have insatiable hunger. Thus, he ventured the galaxy with his children in search of the Infinity Stones, killing half of the population in every planet they come into contact with. The people in those planet saw him as a monster, but Thanos believed he was saving them. He believes he’s the only one who has the knowledge and he believes that it’s his obligation to act upon it, sacrificing everything that he has in the process.

When you see it from this perspective, even if Thanos is the antagonist, maybe he isn’t a villain, or the villain. He did not want the power of the infinity stones to rule over the universe, or to use it for some selfish reasons. He wanted it because he wanted to stabilize the universe. In his mind, suffering is inevitable but at least in his way, civilizations will survive and will be at peace. Just like what happened to Gamora’s planet, as what he claims.

But because we are human, we have human rights. In particular, we have decided that we have the right to live. We created Human Rights because we are aware that we as individuals are capable of suffering. Death causes suffering. That’s why it’s very hard to see Thanos to be other than the villain, since he only don’t plan to bring a little suffering, he plans to bring fourth half the universe’s worth of it.

The stance of humanity against the problem of overpopulation can be summarized in the following meme: 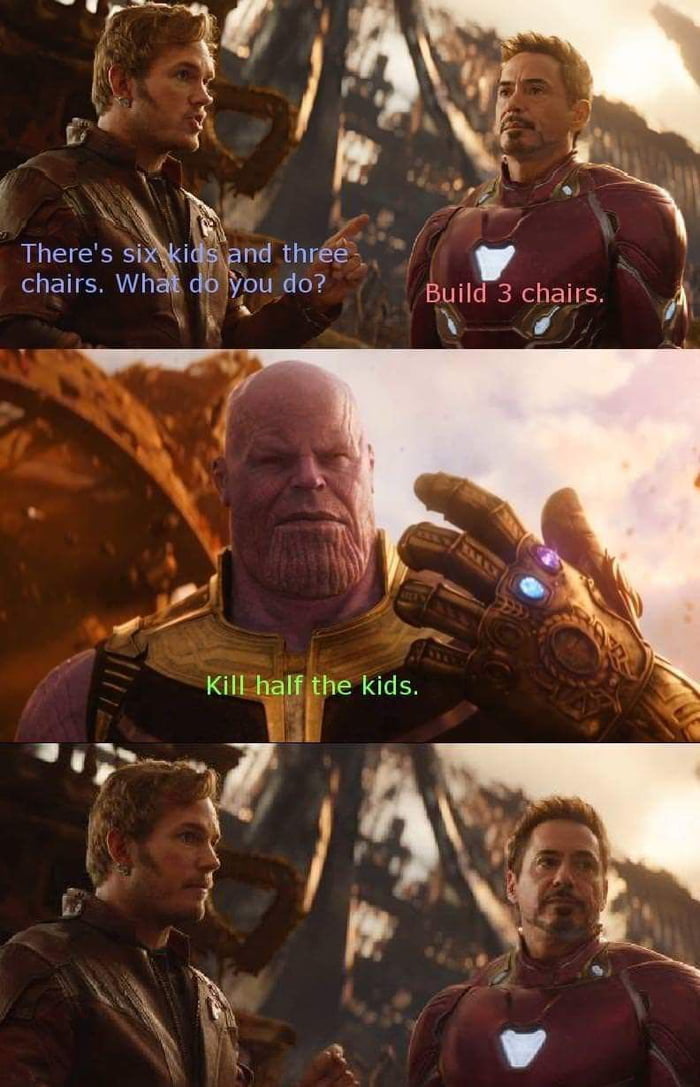 Here, we can see how we humans value life in comparison to Thanos’ character. We prefer to find ways to provide rather than eliminate the excess. Actually that’s why we are planning to terraform Mars, because deep inside we know that Thanos is right. But we do not have the will to eliminate half of our planet’s population (actually Titans too).

But the problem is, population growth is exponential as well as our needs. Also there is social order, i.e. the Pareto Principle. The top 20% richest has the 80% of all wealth. The top 20% most powerful is in control of 80% of all power. It is in nature that even piglets at birth demonstrate this kind of social order. So that means even if we double our resources, it’s only going to benefit the rich/powerful. But the bottom 20%? Sorry to them. They are going to cram in the 1.5% of the remaining resources.

You might want to scream “Socialism is the answer” but that usually doesn’t end well, because 80% of all the work is done by only 20% of the population. This imbalance in nature is what causes war and suffering. We all want to fight for equality but in reality, nature isn’t fair and suffering is inevitable. And the greater the population becomes, the more the collective suffering is going to be.

So what’s the solution? Maybe Thanos actually has a point in proposing to minimize the population. There’s an optimal point where an average individual achieves contentment. There are studies which shows that power or wealth isn’t positively linear to happiness. That is, there is a peak point where power/wealth brings happiness to an individual. After that point, happiness goes a little bit down again because of the stress brought by the excess power/wealth in the individual. The point is, the greater the population is, the lesser is the chance that the bottom 20% of the population is going to get close to this peak happiness threshold considering that resources are constant. But on the other hand, the lesser the population is, again considering that resources are constant, the greater are the chances that the lower 20% are gonna get close to the peak happiness. That means, less suffering and more stability. Turns out Thanos actually did the “simple calculus” because he knows what he’s doing.

But in the end, Thanos is a work of fiction. But overpopulation and suffering is real. And even if Thanos’ idea of wiping out half of the population is mathematically a good thing, it’s never going to pass as a solution in order for us humans to collectively reduce our carbon footprint. So maybe the best thing for us to do for now as individuals is to control our wastes. Ditching plastic bags once in a while collectively maybe could bring us a step farther from being the next Titan.

It’s also fun to check whether Thanos killed you here.